How to Slice Brisket

When cooked right, a brisket is hard to beat. But one wrong cut and all the masterful work on the grill is ruined. Knowing how to slice brisket correctly is essential.

A complete full packer brisket is taken from the lower chest of the animal and made of two main parts:

The point is a fattier cut of meat that might be harder to find in supermarkets. This portion is often chopped since it can be difficult to slice through meat so tender.

The flat is usually what you’ll find if you’re getting a pre-cut brisket. The flat is a leaner cut of meat and best served sliced. Sliced properly, that is. Read further to learn how to do it right.

A good brisket cut has visible marbling. That’s where most of the juice and flavor will come from. But it also helps to leave roughly one-quarter inch of fat on the outside before you cook your brisket to ensure a good level of juiciness and flavor. Trim excess fat with a sharp slicing knife or boning knife. Ideally, trim while the brisket is still cold, and the fat is more solid and easier to cut through.

The key task we want to go over is slicing the meat after your brisket is cooked. Thankfully it’s not rocket science. With these tips in mind, you’ll learn how to cut a brisket like the best of ‘em.

When you pull your brisket off the grill (fully cooked at about 195-205 degrees Fahrenheit internal temperature), the first step is to let it rest for at least 1 hour - you can let it rest up to 3 hours. According to Traeger’s BBQ expert Chad Ward, “Allowing brisket to rest lets juice redistribute throughout the meat. If sliced right off the grill, the meat would lose moisture.”

While we wait for the meat to rest, let’s talk about potential brisket knives.

You want a blade that’s long, sharp, and serrated so that you can cut most or all of the meat at once. The serrated edge also helps saw through the tough parts of the meat. Doug Scheiding’s recommended knife to trim is a 14-inch slicer. Find a good, sharp knife with a weight that feels good in your hand.

Above all else, the important thing is the direction of your cut. You want to slice against the grain. As mentioned above, the brisket has two parts which can make this a little tricky, but nothing you can't tackle.

Before cooking, we recommend slicing a corner of the flat as it is easier to see the grain when the meat is uncooked. Use that corner to help you find the direction when the brisket is done and ready to be sliced.

First, trim any excess fat from the side if you haven’t already trimmed them while prepping your brisket.

You want to slice against the grain (or across) at a 90-degree angle starting with the flat.

Once you start to get to the middle of the meat, you’ll start to see two layers of muscle (see image above) – this is the point cut of the meat. Stop cutting. The direction of the grain has changed. Rotate your meat about 90 degrees so you can cut against the grain of the point cut.

If you’re not sure how to cut a brisket against the grain, start with the flat end of the brisket, cutting slices just shy of one-half inch.

You don’t want to cut down directly like you would a piece of cheese, but you’re not quite sawing through a two-by-four either. The meat should be tender enough that you can gently saw through it while slicing down – as you would through a soft loaf of fresh-baked bread. You want the slices to be the width of a #2 pencil as Aaron Franklin recommends.

Also known as “meat candy,” your first and last cuts are too small to slice the same as the rest, but don’t let these tasty morsels go to waste!

There’s plenty of juicy flavor packed in the burnt ends. Check out our more detailed guide on how to make brisket burnt ends. It’s hard to slice against the grain with these pieces, but they should still be tender since they’ve been separated from the rest of the meat. Slice them into chunks and serve with the rest, or reserve for those who deserve a special treat — like you!

Slicing brisket shouldn’t be much harder than slicing a loaf of bread, but sometimes things don’t go as planned.

Or you might be one of many grillers that prefers to reserve the point for a different purpose than the rest of the brisket because it’s a fattier cut of meat. Whatever the case may be, you can always bust out the cleaver and give everything a good, rough, chop.

Chopped brisket is a common BBQ favorite that’s especially delicious in sandwiches, tacos, chili, and even a brisket pot pie.

It’s usually good to cut the super-rich flavor of chopped brisket with something that’s a little acidic, like vinegar, fresh-squeezed lime, or your favorite BBQ sauce.

Just don’t forget to go against the grain so that you don’t have any chewy chops! The meat might be falling apart a bit too much to make the same precise cuts you would with the flat, but you want to have consistent texture in your chopped brisket. So for the initial chops, try to stick to 90-degree cut against the grain.

It’s your BBQ and your rules, so going against the grain doesn’t just apply to how you cut it, but also how you flavor it. Feel free to browse all of our brisket recipes and let us know what sort of flavor combinations work best for you! 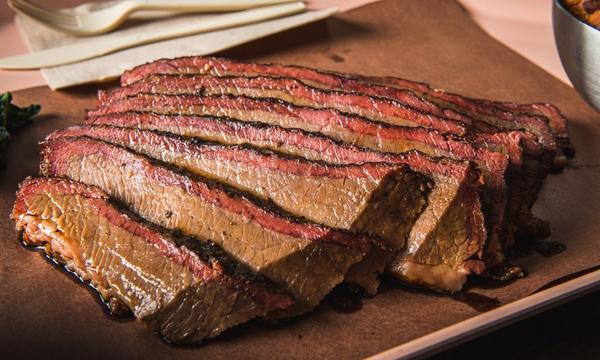 See our smoked brisket recipe and tips for anyone who plans on smoking a brisket, from expert grillmasters to beginners.

Experience the evolution of fire with Traeger's next generation of wood pellet grills. 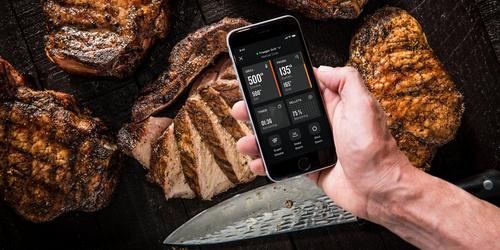 A WORLD OF FLAVOR AT YOUR FINGERTIPS

Take command of your grill from the couch, or on-the-go with the Traeger App. And with hundreds of recipes available, inspiration is just a tap away.

Learn From the Pros

Become an (even) better griller. Use the techniques from these classes to spark up your skills.