How to Smoke a Whole Chicken

How to Choose a Chicken for Smoking

How to Prepare a Chicken for Smoking

How to Spatchcock a Chicken

Smoking Chicken on a Pellet Grill

How Long to Smoke a Whole Chicken

4 Ways to Smoke a Whole Chicken 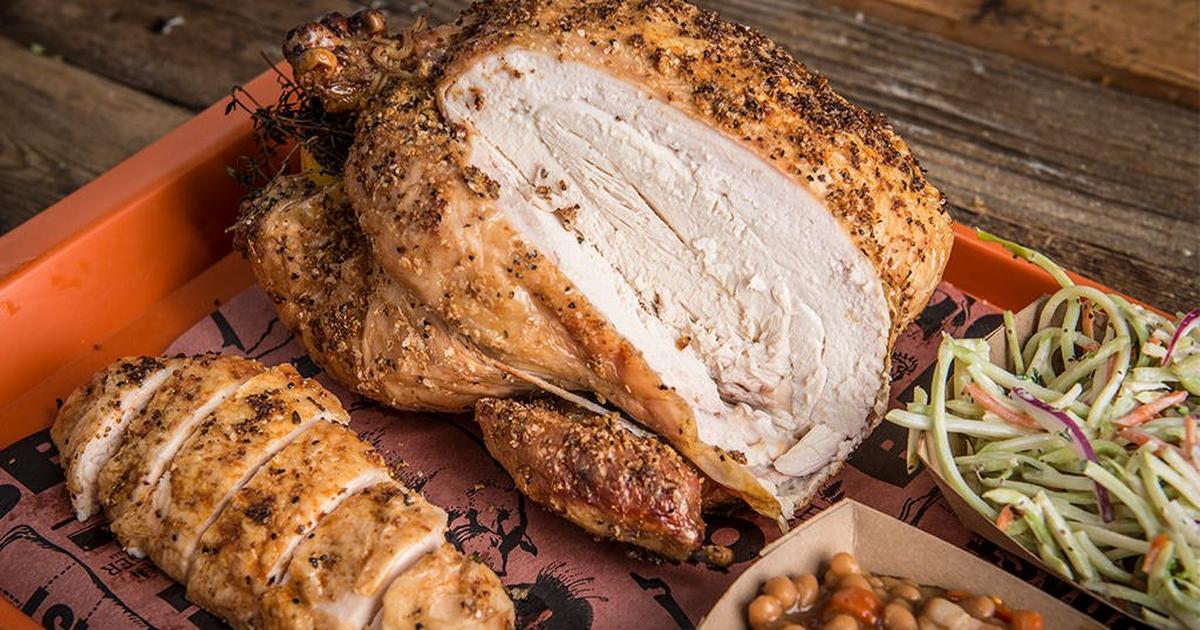 There’s no half-assing when it comes to smoking a whole chicken, but with only three essential steps to follow, anyone (even beginner grillers) can get the hang of it. Once you know how to smoke a whole chicken, you’ll want to challenge yourself to experiment with rubs, and brines.

Poultry can be daunting because undercooked chicken isn’t safe to eat, but at the same time, you don’t want to overdo it. According to a Traeger expert, one of the most common fears people have is “Overcooking. Always go to 165 degrees Fahrenheit internal temperature. Chicken can freak people out but a properly cooked chicken is safe to serve once internal temp hits 165. (Cooking to this temperature) will ensure it stays moist."

At the same time, you may want to consider a higher temperature than is traditionally called for in smoking. "I never cook my chicken under 325 degrees because the skin tends to get a little rubbery," says Curtis Nations, a grilling instructor and BBQ champion.

Read on for the tools and guidelines that will help you smoke a whole chicken like a pro.

How to Choose a Chicken for Smoking

Good barbecue begins with good meat, and ensuring your chicken is healthy and fresh makes all the difference.

Of course, in a perfect world, you’d get it fresh from the farm, but you can get good meat at your local butcher shop or grocery store if you know what to look for when buying chicken.

How to Prepare a Chicken for Smoking

Smoking a whole chicken can take as little as an hour and change including prep time. The three essential steps are:

How to Spatchcock a Chicken

Spatchcocking a chicken is removing the backbone of the bird so that it can lay flat in a pan or grill. A spatchcocked chicken will usually cook more evenly, and in a shorter period of time. Our Traeger experts recommend spatchcocking as the best way to smoke a whole chicken.

This expert tutorial has all the information you need to spatchcock at home.

The basic process simply involves using a large knife to cut on either side of the backbone, through the ribs, then discarding it. Once the backbone is gone, you split the breastbone, allowing you to spread the bird flat. This recipe for Spatchcock Chile-Lime Chicken is an example of how spatchcocking can save you time — it cooks in just 40 minutes!

The beer can chicken method of smoking a whole chicken is something every grillmaster should try once. It makes for a very tender bird, as the evaporation from the beer helps keep the meat from drying out.

We like the beer can method so much, we built a special Chicken Throne to make it easier. This sturdy ceramic stand will keep your chicken from tipping over, and protect the meat from any toxins that the can could release.

Follow our beer can chicken recipe to get tender meat and smoke flavor like you've never had before.

A dry rub can boost your smoked chicken's flavor and appearance. Most chicken rubs include salt, which enhances flavor, and a colorful element like paprika, chile powder, or cumin to help pale chicken skin look more appetizing when it crisps up.

At Traeger, we offer a selection of premade rubs that top grillmasters swear by. Here are three they recommend for whole chicken.

In order to ensure your meat is flavorful to the bone, try out a good brine. Brining increases salt absorption into the meat, according to Traeger Pro Doug Schieding, who cooked the winning chicken at the 2015 Houston Livestock and Rodeo BBQ Contest.

Brining your bird is the best way to infuse flavor deep into the meat. No matter how much salt you use, a dry rub will only penetrate so far into the meat, but submerging your bird in brine pulls salt and flavor into the muscles -- and keeps it there throughout the cooking process.

"I use a brine to impart moisture in my poultry," says Traeger Pro Matt Pittman. "I keep it simple with an old school salt brine. You can use 1/2 cup salt and sugar plus a tablespoon of your favorite BBQ sauce mixed in a gallon of water."

A basic brine is ½ cup of salt (or 1 cup of kosher salt) for every gallon of liquid. You’ll need enough liquid to fully submerge your chicken. Many people — like Matt — use sugar to balance the salty flavor, and this also helps caramelize the skin, giving it an appetizing brown color.

You don’t have to use only water for the liquid. It's a lot of fun to experiment with broths, juices, beers, and more to change up the flavor. Just be wary of salt and sugar content if you’re working with juices or cooking wines. You’ll want to adjust your dry ingredients accordingly.

You can also add all sorts of herbs, vegetables, and spices to your brine to infuse even more flavor into your meat.

Traeger Pro Doug Scheiding offers this brine, which he used in a barbeque competition:

Garlic, lemon, apple, rosemary, thyme, carrots, onions, celery, and sage are all commonly used in poultry brines, but the list doesn’t stop there.

For example, if you’re going for spicy, adding hot peppers to the brine is going to give your meat a kick. Don’t overdo it with the hot peppers, one or two fresh chiles including the seeds is more than enough for an hour brine, you might want to do even less for an overnight brine.

Check out our poultry brining kit.

How Long Should I Brine Chicken?

Ideally, you’ll let your bird brine overnight in the fridge, but even letting it brine for an hour will make a noticeable difference in flavor. The longer it brines, the more salty it gets, which is why we don’t recommend brining for over 24 hours. Brining for too long results in oversalted meat.

You can also inject the brine into your chicken. Traeger Pro Doug Scheiding says: "I used to be a chicken briner but now am an injector."

Injecting brine is "easier and (adds) much more flavor deeper into the meat," he says. Injection is a mixture of phosphates (salt on steroids) and flavor from dissolved seasonings. It adds about 10-17% moisture to chicken.

If you want to start out simple, Doug recommends chicken broth. If you're ready to go with a more advanced brine — like the one Scheiding used to win Grand Champion at the Houston Livestock Show and Rodeo — try this Traeger chicken injection recipe.

How to Dry Brine Chicken

Another technique recommended by Doug Scheiding is dry-brining. This involves salting the chicken, then letting it sit in the refrigerator while the salt is absorbed. "Basically the salt on the skin dissolves and moves into the skin," says Doug. "This helps give it more bite through or perhaps even crispiness depending on how it is cooked."

Doug describes this technique in his Traeger beef ribs recipe. The same steps will work well for chicken, too.

Smoking Chicken on a Pellet Grill

Smoking a whole chicken on a pellet grill is as easy as cooking in an oven. In a pellet grill, which uses wood pellets as a source of fuel, your bird will be infused with smoke flavor.

What’s the best wood for smoked chicken? Most pair well with poultry, so let your other flavors guide you. If you need to add sweetness, any fruit tree or maple will help. If you want bold flavor try hickory or mesquite, and if you’re just not sure, feel free to try a premade blend.

Doug's opinion? "For chicken, fish, and turkey it is always apple."

After you choose your smoke flavor, set the pellet grill to 225 degrees Fahrenheit, or the Super Smoke setting on your Traeger. Preheat with the lid closed for 15 minutes. Remove chicken from the brine (if used) and pat dry.

Place the whole chicken in your Traeger and cook at it at 225 degrees Fahrenheit for 45-60 minutes. This low and slow start will let the smoke flavor penetrate the bird.

How Long to Smoke a Whole Chicken

The cooking time for a smoked whole chicken will depend on how you've prepared it, the temperature you've set, and the final product you're looking for. The method above will give your bird a smoky flavor, but may not result in crispy skin if not roasted at a higher temperature. "The higher the temperature, the crispier the skin," says Matt Pittman of Meat Church BBQ.

To measure the temperature of a whole chicken, insert a digital thermometer into the thickest part of the breast. The chicken is ready to take off the grill when the temperature reaches 165 degrees F.

To reheat, it’s perfectly fine to leave meat on the bone. Create a tent of tin foil to cover your smoked chicken, and before closing it, add a tablespoon of water. This will create steam inside the foil that cooks the meat quickly while moistening it.

Heat your oven or pellet grill to 325 degrees and cook until the internal temperature reaches 165 degrees.

If you’re eager to use or discard the carcass you can use shredded chicken in all kinds of recipes. Just be wary of overcooking it. Typically, you’ll want to make sure the vegetables are done or close to done before adding precooked meat.

The flavor of smoked chicken is unique, and the leftovers make an irresistible topping for pizza, salads, sandwiches, and more. Or, you can give your leftover smoked chicken a new home in these tasty recipes.

This White Chicken Chili recipe is a warm and cozy option for leftover chicken. And it's incredibly easy. Just add chicken broth, leftover chicken, white beans, salsa, cumin, onion powder, garlic powder, and salt/pepper to taste to an oven-safe pot. Bake in your oven (or Traeger grill) at 400 degrees Fahrenheit for four hours.

Pour into bowls and top with avocado, sour cream, and chopped cilantro.

This spicy chicken salad recipe calls for brining, then smoking chicken, but you can just use your leftover chicken instead of cooking a new batch.

Dice the chicken and add chopped red bell pepper, green bell pepper, scallions, and pickled jalapeño peppers. Then make a dressing by whisking together the mayonnaise, lime juice, cumin, black pepper, and garlic salt. Stir in the cilantro, then stir the chicken mixture in with the dressing. You can make this ahead and chill it for up to 3 days.

Replace the grilled chicken in this Loaded Grilled Chicken Tacos recipe with your leftover smoked chicken. The recipe has instructions for making fresh pico de gallo, guacamole, and spiked sour cream to serve with the tacos — serve them over warm tortillas or in crispy shells, your call.

4 Ways to Smoke a Whole Chicken

There’s no limit to what you can do to flavor your chicken, but don’t let the options overwhelm you. Here are some basic recipe ideas for getting started:

You’re off to a good start with any of those ideas, and if you’re on the hunt for more specific flavors, be sure to browse more recipes that show you how to smoke a whole chicken.

Experience the evolution of fire with Traeger's next generation of wood pellet grills.

Learn From the Pros

Become an (even) better griller. Use the techniques from these classes to spark up your skills.